Archive for the ‘Blog’ Category

CD1 GOP candidates must submit 1,196 signatures to qualify for the ballot and Babeu submitted nearly twice that amout – 2,206 signatures.

“I am honored so many people signed my petitions,” Babeu said. “This campaign is about the people of CD1. Their support is humbling.”

Babeu has raised the most amount of money of any of the Republican candidates and leads in all of the polls released to date.

“People understand that we must secure the border, halt the EPA overreach and grow jobs,” Babeu said. “The message of this campaign is simple: The federal government must work for us not hinder our ability to work.”

Babeu is a veteran of the Iraq War and spent 20 years in the Army National Guard, rising to the rank of major. In addition, Babeu commanded 700 troops on the Arizona-Mexico border as part of Operation Jump Start, which helped reduce illegal immigration and drug smuggling by 94 percent in the Yuma Sector. 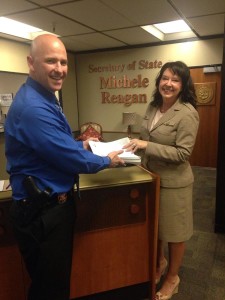 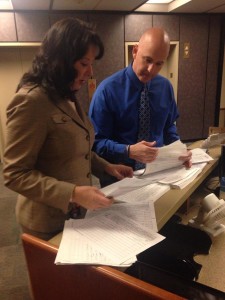 “This administration under Barack Obama keeps putting other families, other people outside of America, first – ahead of us, American families, and our national security.” – Sheriff Paul Babeu

Paul Babeu on After the Bell

Check out Sheriff Paul Babeu on After the Bell (March 22, 2016). He discussed his commitment to border security, and keeping our nation safe from terror. Check it out now!

Sheriff Paul Babeu on Your World With Neil Cavuto

Check out Sheriff Paul Babeu on Your World with Neil Cavuto (March 10, 2016). He discussed the Democrats’ continuing insistence that no illegals be deported. In their eyes, there is no need to enforce our immigration laws. They are wrong, and we need to fight back. Watch Now!

The National Border Patrol Council Local 2544, which represents about 3000 rank-and-file agents in the Tucson Sector, announced it support for Babeu because of his proven track record of standing by and helping the Border Patrol.

“Agents have seen firsthand your interest and concern in the important job and mission each of them perform on a daily basis” Arturo Del Cueto wrote to Babeu. “You have solicited the help and input of rank and file Border Patrol agents, and we are sure that with you in office, the agents needs will be met.”

Babeu assisted the Border Patrol when he was in command of the National Guard in the Yuma Sector during Operation Jump Start from 2006 to 2007. With the increased manpower, the Yuma Sector saw a 94 percent decrease in apprehensions of illegal immigrants.

“I want to thank the Tucson Sector Border Patrol agents who put their faith in me,” Babeu said. “When I am in Congress, my No. 1 priority will be to ensure the Border Patrol has the assets it needs to secure our border and help keep us safe.”

Posted on: December 9th, 2015 by admin No Comments 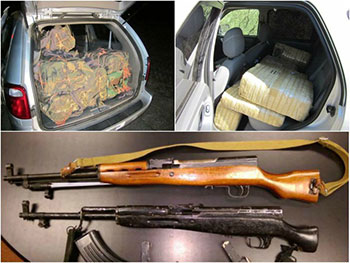 The series of incidents occurred between November 29 and December 3.

All of the cases involved traffic stops, some of which turned into vehicles fleeing from deputies or Border Patrol agents.

In one of the incidents, deputies found two assault-type rifles in the back seat with loaded magazines, according to Pinal County Sheriff’s Office spokesperson Mark Clark.

“It would take a task force of monumental proportions to interdict all the drugs that are being smuggled through Pinal County, but our deputies work tirelessly to stop as much of the drug trafficking as possible with our limited resources,” Sheriff Paul Babeu said. “More troubling is we are only catching maybe ten percent and it stands to reason, if this many Mexican Cartel smugglers are getting through, the enemies of America can more easily slip in without detection of arrest.”

FLORENCE, AZ (KPHO/KTVK) –
Fall is marijuana harvest season for the cartels, and officers along the border are seeing an annual spike in smugglers.

Drug runners continue to be caught smuggling large bundles of marijuana across the border, and up into Arizona.

Pinal County Sheriff Paul Babeu on Wednesday showed off dozens of bundles of marijuana, each weighing between 50 and 60 pounds. They were confiscated in just the last few weeks.

Pinal County deputies recently arrested 21 suspected members of the Sinaloa Cartel, but say 40 others were able to run away.

In addition to the smugglers, deputies and Border Patrol agents are going after lookouts, the scouts who camp in the mountains and help direct the drug traffic through the desert.

Babeu, who is running for Congress, said that over the last year, his office has arrested 19 lookouts. Instead of sending them to be deported, the Pinal County Attorney’s Office has been prosecuting them. Many have already been sentenced to two or three years behind bars.

“It’s the first time in the nation this has been done. They’re clearly part of the operation and the network,” Babeu said.

Lookouts are paid well. Babeu said that through interviews, his investigators found the scouts were making thousands of dollars a week.

Babeu said his office will continue targeting the lookouts as part of an overall strategy to disrupt the drug supply chain.

The two-term sheriff will vie for the open 1st Congressional District.

“I’ve spent seven years fighting Washington’s inaction and now it’s time to bring the fight directly to our nation’s capital,” Babeu said. “I will work tirelessly to protect the residents of rural Arizona, shrink the federal government, overturn Obamacare and guard against attacks on the 2nd Amendment.”

The 1st Congressional District stretches from Flagstaff through the White Mountains and south to Pinal County and northern Pima County. The district is one of the largest in the country and encompasses rural and suburban areas plus several Native American tribes.

“The challenges facing CD1 stretch far beyond the district’s boundaries,” Babeu said. “Illegal immigration impacts us all. I’ve stood on the front lines against the drug cartels and human smuggling rings and I will bring this same tenacious work ethic to Washington, D.C.”

The issues facing CD1 are as diverse as its people and regions. Babeu said he plans to work to improve forest health, ensure that the U.S. Forest Service is acting responsibly, increase job opportunities and fight overreach by the U.S. EPA.

“I will work to ensure the EPA deals fairly with Arizona,” Babeu said. “Coal power plants provide much of the energy for rural Arizona and I will fight any misguided effort to shutter those plants and make it more expensive for residents and business to buy electricity.”

Babeu is a veteran of the Iraq War and spent 20 years in the Army National Guard, rising to the rank of major. In addition, Babeu commanded 700 troops on the Arizona-Mexico border as part of Operation Jump Start, which helped reduce illegal immigration and drug smuggling by 94 percent in the Yuma Sector.

Babeu began his law enforcement career as a City of Chandler police officer and eventually became the first Republican sheriff of Pinal County. Since taking office, Babeu’s deputies have seized more than 162,000 pounds of drugs, exposed an identity theft ring in the county recorders office and busted Superior Court personnel in a bribery scandal. Service has improved through regimented staff training and high performance standards evidenced in the national accreditation of the 1,100-inmate jail.

Babeu boasts the biggest drug bust against a Mexican drug cartel in Arizona history – nearly $3 billion worth. Recent efforts are targeting the Sinaloa Cartel scouts occupying mountaintops along the drug and human smuggling corridor in an effort to provide safe passage as they head to other parts of the country.

“Stopping the flow of drugs and smuggling rings must be a priority of law enforcement and is a defined responsibility of the federal government,” Babeu said. “Our politicians have failed us time and again when it comes to securing our southern border. I will not rest until the federal government does its job so it is not left to the local sheriffs and police departments in border states to fend for themselves.”

A July 4 collision on Papago Road that injured two children is being blamed on a driver who was in the country illegally.

A woman with two children was driving a 2002 Oldsmobile Bravado west on Papago near the intersection of Amarillo Valley Road around 2 p.m. Saturday when it collided with an eastbound 2003 Ford Explorer driven by Manuel Perez-Vasquez.

Perez-Vasquez reportedly fled the scene with at least one passenger from the Explorer but later returned.

Pinal County Sheriff Paul Babeu said Perez-Vasquez had been deported to Mexico six times since May 5, 2012.

A 5-year-old boy in the Oldsmobile received a significant laceration to the head, according to PCSO. He was transported to a hospital by air ambulance, and an injured 2-year-old girl was transported by ambulance.

Detectives from the PCSO Vehicular Crimes Unit determined Perez-Vasquez traveled left of center, causing the collision. Perez-Vasquez allegedly showed signs of drug impairment and was placed under arrest on suspicion of driving while impaired by drugs and leaving the scene of an injury collision, a felony. He allegedly confessed to smoking marijuana before the collision.

“He refused to give a blood sample when arrested because he knew he had drugs in his system,” Babeu said. “Detectives had to get a search warrant from a judge to obtain the blood sample.”

Perez-Vasquez, 29, was booked into the Pinal County Jail. He will face additional charges pending the results of the blood test.

One witness stated there may have been two to five individuals who ran from the Ford Explorer.

Pinal County Sheriff Paul Babeu had a different sort of surprise ready in time for Father’s Day: Last week, his office conducted a three-day warrant sweep aimed at people who were wanted for failing to pay their child support.

The effort began Tuesday morning with more than 90 warrants. In the end, seven men and two women were placed under arrest.

Most people the investigators were looking for had either left the county or moved from the address on file with the sheriff’s office, Babeu said in a press release.

Even so, the sweep netted almost $14,000 in bond monies in addition to giving a financial boost to a handful of parents who should have been on the receiving end of payments all along.

Among those arrested were a 37-year-old Eloy woman who owed more than $1,400 and a 40-year-old Coolidge man who owed $3,000 and turned himself in when he heard that deputies were looking for him.

Paid for by Paul Babeu for Congress