Archive for the ‘Blog’ Category

Posted on: November 7th, 2016 by admin No Comments

Download a reminder to make your voice heard on Tuesday, and stand with us to send a Sheriff to Washington, D.C. One quick click and you’re on your way!

In the 1st Congressional District, Pinal County Sheriff Paul Babeu won a crowded Republican primary race and faces Democrat Tom O’Halleran of Sedona, who earlier served in the Legislature as a Republican. Ironically, Babeu’s Pinal political machine unraveled at the same time, as candidates he backed for county office lost.

Babeu faces a tough battle in the Democratic-leaning district. We have opposed some of his actions in the past, but we endorse him because he would vote for Paul Ryan or another Republican for speaker instead of Nancy Pelosi. When she and the Democrats controlled the House, Obamacare and other ill-advised legislation was passed.

Listen To My New Radio Ad

We can’t afford to send Tax & Spend O’Halleran to serve us in Washington, D.C. It would just be more of the same broken promises, and wasteful spending. Check out my latest radio ad to learn more now!

Check Out My Latest TV Ads

Watch now and let me know what you think. I hope you’ll help us spread the word by sharing them with your friends and family today!

Kirkpatrick is challenging John McCain for his Senate seat.

Environmentalists and the Obama administration have pushed for tighter emissions controls at coal plants. That includes the Navajo Generating Station in the far northern part of the state.

Babeu told KTVK-TV Channel 3 coal would be a central issue to his November campaign.

The First Congressional District includes much of northern Arizona, including the Navajo Nation and Flagstaff as well as Globe, Miami and Pinal County.

Babeu has received some national attention for dealing with illegal immigration and drug cartels. Pinal County is in between Tucson and Phoenix.

The district is as large as some states and could receive national attention from both political parties, business groups and environmentalists.

To many it may seem like our nation is in dark times, but with the right leaders, we can make America strong and safe again.

Former Arizona Governor Jan Brewer is one of those people. A firebrand who stood up to President Obama and was the architect of Arizona’s economic comeback.

She’s not to be messed with.

Now, she has endorsed Sherrif Babeu for Congress.

“We need leaders like Paul who get things done. Paul is a truth teller, just like me, who will take the fight against corrupt liberals like Nancy Pelosi and Hillary Clinton.”

He has the momentum and support and now he needs to close strong to win the primary on August 30 and begin the fight for victory in November.

Thank you Governor Brewer for being on Babeu’s team.

Babeu, the leading candidate in the GOP primary in Congressional District 1, achieved the “On the Radar” designation Friday after several quarters of strong fundraising.

It’s only fitting that as a two-term sheriff I should now be a young gun,” Babeu said. “Getting On the Radar shows our commitment to a strong campaign is paying off and I look forward to continuing to work with the NRCC.”

It is important to work closely with the NRCC to help elect a conservative Republican that values limited government with strong national security credentials,” Babeu said.

Babeu is a veteran of the Iraq War and spent 20 years in the Army National Guard, rising to the rank of major. In addition, Babeu commanded 700 troops on the Arizona-Mexico border as part of Operation Jump Start, which helped reduce illegal immigration and drug smuggling by 94 percent in the Yuma Sector. He was first elected Pinal County Sheriff in 2008 and won reelection in 2012.

Begay, a Republican from Kayenta, decided to leave the race and endorse Babeu because of the sheriff’s strong support for law enforcement, national security issues and instilling fiscal sanity in Congress.

“Paul Babeu is a conservative we can all trust to represent the needs of Congressional District 1,” Begay said. “He is standing strong for the Native American tribes against the federal government’s onerous regulations that threaten hundreds of jobs on the reservations.”

Begay won wide praise last year when he switched from a Democrat to a Republican. He has sought to improve conditions in his district, winning money for important projects on and near the reservations.

Babeu praised Begay’s service to the residents of northeastern Arizona.

“Sen. Begay is a proven leader who worked in a bipartisan way to improve the lives of his constituents,” Babeu said. “I welcomed him into the Republican Party last year because he showed Arizonans the true size of our party’s big tent.”

Begay said he will spend the next few months helping Babeu win the GOP primary and then the general election.

Babeu is a veteran of the Iraq War and spent 20 years in the Army National Guard, rising to the rank of major. In addition, Babeu commanded 700 troops on the Arizona-Mexico border as part of Operation Jump Start, which helped reduce illegal immigration and drug smuggling by 94 percent in the Yuma Sector. He was first elected Pinal County Sheriff in 2008 and won reelection in 2012.

Less than two months before Republicans select a congressional nominee in Arizona’s open 1st District, a just-completed survey shows Pinal County Sheriff Paul Babeu — by far one of the most unique GOP contenders for Congress anywhere in the U.S. — topping the seven-candidate primary field with 40 per cent of the vote.

The race is being watched by national leaders in both parties as well as the national media.
With incumbent Democrat Ann Kirkpatrick relinquishing her seat to challenge Republican Sen. John McCain, the very marginal Democratic-leaning 1st District is one of a handful nationwide that could “flip” to Republican this fall.

But the other reason for the growing attention on Arizona-1 is Babeu himself— a lawman and border hard-liner who has become a national hero to many conservatives.

“All of my friends and family knew it, and, although I never went around and advertised it, it was one of the worst-kept secrets in the county when I ran for sheriff,” Babeu told Newsmax.

Babeu has been elected twice in landslide wins in his home county and says his popularity will help him win this up-for-grabs seat.

He is now seeking nomination for Congress in the primarily rural 1s tDistrict, which is larger than New York State and home to the largest concentration of American Indians (22 percent) of any congressional district in the U.S.

In a district that suffers an extreme impact from the porous U.S-Mexican border, Babeu is frequently asked—not surprisingly–about his stand on border security.

“We’ve got to secure our border in order to stop the onslaught of crime, period” he said, recalling how he oversaw the “Pipeline Express” operation that became the largest drug bust along the border.

Overall, Babeu noted proudly, “there has been a 94 percent reduction of illegals and drugs crossing over the border and this is connected to my military service in Yuma commanding 700 troops helping the US Border Patrol secure the Yuma Sector.”

He also noted that the efforts of his department along the border led to the capture of 21 drug cartel scouts and 108 firearms linked to the notorious Guzman gang of Mexico.

Babeu, whose Army service includes a tour in Iraq, is also anxious to deal with foreign policy in Congress. In his words, “No one should be wondering how ISIS came about. When President Obama set a deadline and withdrew our troops, he relinquished any influence the U.S. could have in Iraq. It was a recipe for disaster — up popped ISIS.”

The Defend Our Nation Political Action Committee, which supports veterans running for Congress, just weighed in with a strong endorsement and check for Babeu. (When John Kennedy and Richard Nixon entered the House in 1946, 71 percent of its members were veterans; today, only 14 percent have served in the military.)

The new OH Predictive Insights poll (conducted for Babeu’s campaign) showed the sheriff leading the GOP field with 40 percent of the vote, followed by former Arizona Secretary of State and gubernatorial hopeful Ken Bennett with 11 percent, rancher and past U.S. House hopeful Gary Kiehne 10 percent, and four other candidates at 3 percent and below.

State and national GOP operatives have high hopes of picking up the 1st District, pointing out that both Mitt Romney and Arizona Gov. Doug Ducey carried the district in ’12 and ’14 respectively.

Inevitably, questions about the tragedy in Orlando, Florida and resulting comments from the White House about Republicans not caring about gay Americans are posed to Babeu.

“They’re wrong,” he said, “The Republican Party is an open party and a big tent. I’m a living, breathing example of that.”

“Paul Babeu’s strong law enforcement record and military service is what Arizona needs when fighting for Arizona’s interests in DC.,” Tobin said. “Federal overreach and President Obama’s utter failure to enforce immigration law or secure the border serve as glaring examples of what we need fixed.”

Tobin, the former House speaker, narrowly lost his 2014 race during a hard-fought contest. However, he continued his public service in the Ducey Administration and now after his appointment to the Corporation Commission, where he specializes in representing rural Arizona.

“Paul Babeu offers republicans a clear opportunity to win back this seat away from Democrats who support job-killing regulations like Obamacare and the Clean Power Plan,” Tobin said. “I encourage CD1 voters to send a message that Obamacare doesn’t work for Arizona by electing Paul Babeu to repeal this disastrous policy.”

Babeu, the two-term Pinal County sheriff, praised Tobin’s commitment to Arizona residents and thanked him for the support.

“Andy Tobin’s decade long service to Arizona is a testament to his character and his love for the people of this great state,” Babeu said. “I thank him for that service and his support during this important election.” 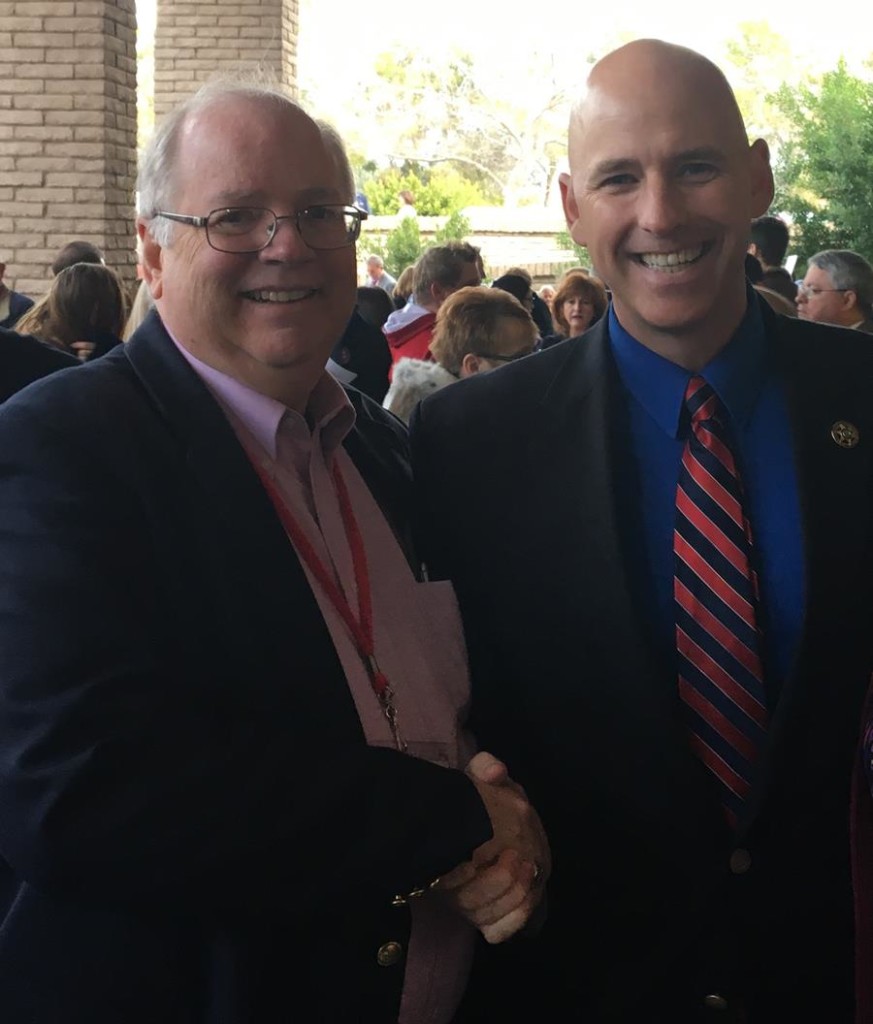 Paid for by Paul Babeu for Congress